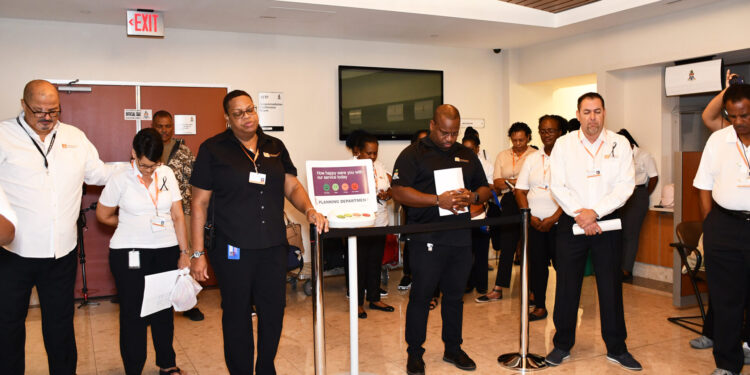 (CMR) Elections staff kicked off what is expected to be an extremely busy Election Day with an early flurry of activity from 4 am this morning, Wednesday, 14 April 2021.

The polling stations opened across the Cayman Islands at 7 am with a minute’s silence as a mark of respect to His Royal Highness Prince Philip, and polling began at 7:01 am. Election staff wore black ribbon pins to mark their respect.

Polling and logistical staff were deployed in school buses starting at 5 am to the 17 Electoral districts across Grand Cayman, along with empty ballot boxes and unmarked ballots in preparation to begin accepting voters from 7 am. In the Brac, similar action took place to open the polling at the two electoral districts. At the Government Administration Building, the Election Command Centre and Media Centre were manned from 4 am for the 7 am start of polling.

“I am very pleased with how smooth the Election Day rollout has gone so far. The teams have done an exceptional job and everything is going as planned and organised. We look forward to welcoming voters and doing our part to facilitate their important role in this democracy. We have inspected all polling stations and we are ready to start the polling at 7 am,” commented Supervisor of Elections, Wesley Howell at 5 am.

Following some passing early morning showers, Deputy Supervisor  Sheena Glasgow added, “We will get it done. The staff has been training for weeks and know what to do. Personally, I take the rain as blessings.”

Also present at the command center was Domestic Election Observer Colford Scott. He represented the eight observers who will begin visiting the polling stations around Grand Cayman, as well as the one observer on Cayman Brac.

Explaining some of the work of the Domestic Observers over the day, Scott noted, “We are observing the process to see everything is going according to law and that international best practices are maintained. So far, the mobile polling has been very efficiently carried out. Also, all postal and mobile ballots will be added to one of the regular boxes to ensure that the process of the secrecy of polling is maintained.”

He commented, “All the 17 buses left between 5 and 5:30 am to go to their respective polling stations, and we are expecting all will be open on time for the 7 am start. We also look forward to a good turnout today and the conclusion by night.”

Scott concluded, “So far, the Elections Office led by the Supervisor Mr. Wesley Howell has done a fantastic job. A preliminary report from the observers’ team led by Mr. Hadley Roberts is expected tomorrow, followed by the full report in a couple of weeks.”