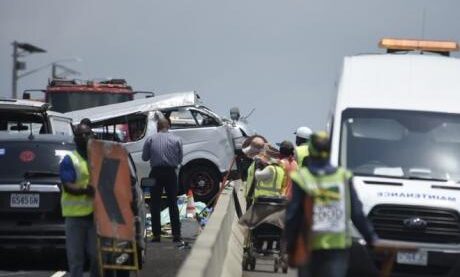 (CMR) Four persons were killed and 11 others injured when a Toyota Hiace bus crashed along the PJ Patterson Highway near Spanish Town at about 11 am on Monday.

The police said the driver of the public passenger bus appeared to have lost control of the vehicle, which was traveling at high speed eastbound towards Kingston. The vehicle collided in the rear of a truck before overturning several times before coming to a stop on the road’s median.

Two men and two women were pronounced dead, while the other passengers were rushed to hospital.

The police said several of the passengers transported to the Spanish Town Hospital were in critical condition.

Several videos on social media showed the lifeless bodies of several persons along the roadway.